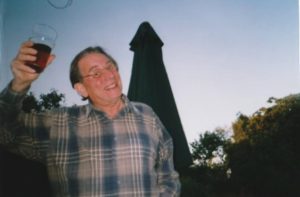 Here’s the speech that I made at my Dad’s funeral, in January 2021.

It falls to me to sketch Dad’s long and happy life; to his last days he would never fail to remark on what a good life he had had, and if he should “pop his clogs”, it would be without the least hint of regret.

It must have been a hard childhood though. Born into the harsh depression of the 1930s, his mother later remarked that she had to forgo food herself to put it on the table for Eileen, Ron, Doreen and Tony. The horrific blitz of November 1940 left close neighbours dead, and gave us the startling image of nine year old Tony walking through the smouldering ruins of Coventry Cathedral the next morning. At age 11 his beloved older brother Ron was killed when his ship was torpedoed in the North Atlantic. And at 14 his father died suddenly, leaving Dad as ‘the man of the house’.

But with great hardship came silver linings. Evacuated to the Wyre Forest he deepened his love of nature, studying butterflies and birds in an environment that must have been joyous to a kid from the back-to-backs of Coventry, despite the loneliness of separation from Mum and Dad.

Like the most fortunate of his generation, education offered a route out of poverty, and Dad grabbed it eagerly, winning a prized place at Coventry Tech, and later Birmingham University. As a student, he didn’t respect any boundaries between Science, Arts and Humanities. He followed curiosity wherever it would lead. I suspect he must have been a frustrating student to teach, being not the least bit respectful of seniority or reputation!

In similar vein, he regarded his two years National Service in the RAF, as a pointless exercise in authoritarianism, mitigated only by discovering traditional Jazz, lighting up the barracks with the sound of King Oliver on scratchy 78s.

We often forget his physical achievements as a young man. His success as a runner, through studying, and emulating, the revolutionary training methods of the great Emil Zatopek. A 100-mile-a-day bike tour around England on a fixed-wheel bike! Many mountaineering and rock-climbing trips, especially in Snowdonia.

We should also remember his times travelling and working in Franco’s Spain in the early 1950s. A country at that time more remote and challenging than, say, India might be today. When other memories deserted him, Dad frequently recalled the warm welcome and friendship he received from the community in Pamplona.

Of course the greatest gift of his Birmingham years was finding love and marriage. Mum said she married Dad because he was different from the rest! Which I’m sure was an understatement and made for a challenging relationship with her family, but he loved her for 63 years with complete devotion and loyalty. As they made a home together, he sought a career that would make use of his talents and accommodate his need for autonomy, and after some years found his niche leading a team of remedial reading teachers, which suited him down to the ground.

Eventually, children arrived! I remember, long, long ago, asking Dad when was the happiest time of his life, and he replied with certainty that it was his thirties; with family and career resolved, he felt able relax and flourish. Perhaps later years, in retirement, equalled that happy period, I don’t know.

Throughout his life he revelled in pursuing an amazingly wide variety of interests, deep-diving until he mastered the very essence of the subject. Whether it was wine-making or self-sufficiency, investing or football pools, family treeing or military history, philosophy or photography. On all these subjects and more, he devoured thousands of books, from library or charity shop, until he’d marshalled the facts and absorbed the theories, and formulated a few theories of his own in that big brain. I must have passed on plenty of those theories, because the phrase: “Rob’s Dad says…” was one I repeatedly heard from friends and colleagues… usually followed by a prediction of the forthcoming housing crash.

He and Mum made a happy home for us in Stretton, where, over more than 35 years, Dad fought a mostly-successful battle with two acres of land, converting a paddock into a much-loved orchard; while the crumbling two-hundred-year-old house proved a bigger challenge. Happily, with the catalyst of an immensely kind friend, they were eventually able to escape, so that Dad could live out his last years in the bungalow that he came to adore.

With the arrival of grandchildren, Dad reinvented himself as this amazing fun-loving character known as Grumpy Gramps, inspiring love and joy, and I know that we will hear more about that later.

His vast knowledge came in handy in compiling the annual quiz, which was, for many years, a staple of the Stretton WI calendar. He also thoroughly enjoyed participating in the U3A Philosophy group. In recent years, as the big brain tragically faded, we imagined, with some bafflement, the course of those philosophical debates. But the lovely, warm words that Mum received from Brian, leader of the Philosophy group, suggest that he remained a valued member, even when his mind was not as sharp.

And so, finally, I want to speak more personally. A fly on the wall in the family home, watching Dad, so often with his nose in a book, might form the opinion that he was a hands-off father. In a sense that’s true, but let me say this. He took me to my first football match. He led me to the top of Snowdon when I was seven years old. He played me folk and blues records. He was there with me when I first cycled into town. He brought home our first computer, and sat beside me as we typed in programmes together. He taught me about worm composting! He extolled the importance of saving for an early retirement. He coached me in investing. His influence runs through me like the blood through my veins; he fired my greatest enthusiasms, he inspired my life goals.

I will always be grateful. Thank you Dad.